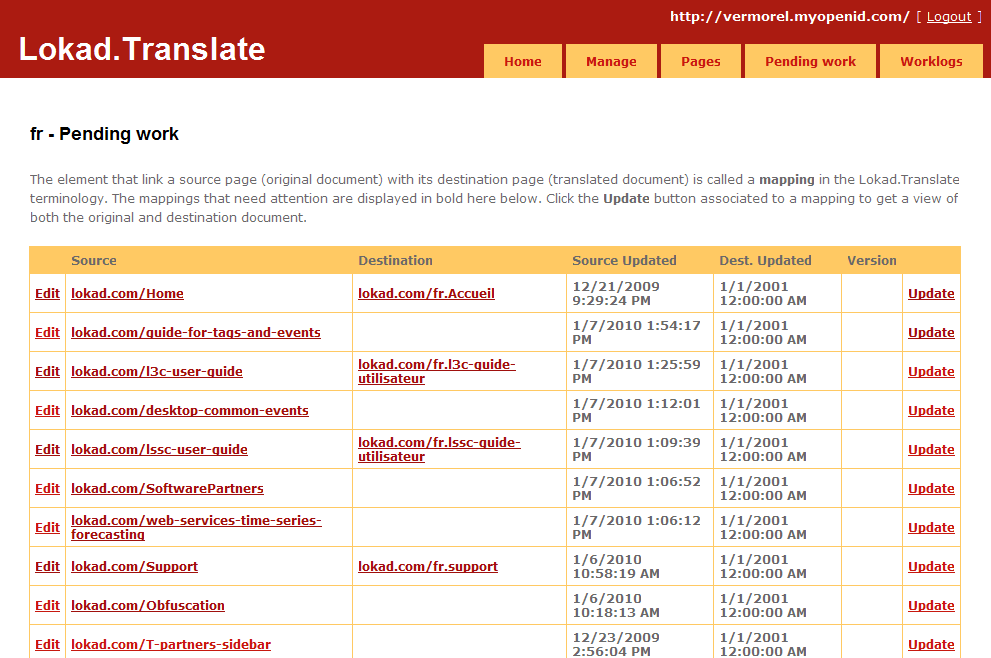 A few weeks ago, I have been discussing the idea of continuous localization. In summary, the whole point is to do for localization (either websites or webapps) what is done by the continuous integration server.

Obviously, the translation itself should be done by professional translators, as automated translation tools are still light years away from the required quality.

Beyond this aspect, nearly all the mundane steps involved in localization works can be automated.

This project has taken the shape of an open-source contribution codenamed Lokad.Translate. This webapp is based on ASP.NET MVC / C# / NHibernate and targets Windows Azure.

This first release comes as a single-tenant app. We are hosting our own instance at translate.lokad.com but if you want start using Lokad.Translate, you will need to setup your own.

Considering that Lokad.Translate is using both a WebRole and a WorkerRole (plus a 1Gb SQL Azure instance too), hosting Lokad.Translate on Azure should cost a bit less than $200 / month.

Obviously, that’s a pretty steep pricing for a small webapp. It’s not surprising that Make it less expensive to run my very small service on Azure comes as the No1 community most-voted feature.

Yet, I think the situation will improve within 2010. Many cloud hosting providers such as RackSpace are already featuring small VMs that would be vastly sufficient for a single tenant version of Lokad.Translate. Considering that Microsoft will be offering similar VMs at some point, it would already drop the price around $30.

If we add also that CPU pricing isn’t going to stay stuck at $0.12 forever, the hosting price of Lokad.Translate is likely to drop significantly within 2010.

Obviously, the most efficient way to cut the hosting costs would be to turn Lokad.Translate into a multi-tenant webapp. Depending on community feedback, we might consider going that road later on.

The next milestone for Lokad.Translate will be to add support for RESX files in order to support not only website localization, but webapp localization as well.

Looks brilliant Joannes, especially pending RESX support :) This would be a game changer for one of my old employers, who sell a product in nine languages… January 9, 2010 | Nicholas Blumhardt

Hi Nicholas, thanks for the positive feedback. Don’t hesitate to forward the link to your old employer :-) I think RESX will make it into Lokad.Translate within a few months from now (it’s not such a big feature to implement, but we don’t need it right now for Lokad). January 10, 2010 | Joannes Vermorel

I agree with you about the possibility of localizing all the mundane steps in website localization. Any updated ETA for RESX support? August 23, 2010 | Adam

For RESX files, a commercial product has been released, check out Amanuens.com Actually, I am proud to have inspired a company out of this modest post. :-) August 24, 2010 | Joannes Vermorel